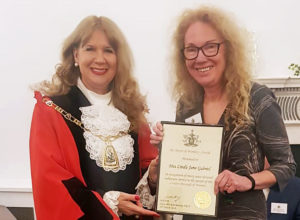 On 20th March 2019, recently retired Chair of Bromley, Lewisham & Greenwich (BLG) Mind, Linda Gabriel received an award from then Mayor of Bromley, Councillor Kim Botting at the Mayor of Bromley Awards at The Old Palace, in recognition of her outstanding voluntary service to the people of the London Borough of Bromley.

Linda has been a tireless, committed and highly effective volunteer for Bromley, Lewisham & Greenwich Mind (BLG Mind) from 2006-2018. She initially served as a Trustee, then Vice-Chair for eight years and, from 2010, as Chair of Trustees. Linda was also active in the Mind in London Chairs network.

Linda has contributed a huge amount to the success of BLG Mind over the last 10 years, including:

Linda always provided highly intelligent and thoughtful analysis, brought an array of expertise including from her previous professional life as a lawyer, and developed good relationships with people both within and outside of the organisation. She worked extremely hard, giving huge amounts of time to ensuring BLG Mind was well run and met people’s needs. She also enjoyed meeting with staff, volunteers, service users and carers and made time to do that.

Ben Taylor, Chief Executive of BLG Mind, said,  “Linda has a strong commitment to providing high quality support for people with mental health problems and dementia, and worked hard to ensure this was what thousands of people accessing BLG Mind services received. Personally, I learned a huge amount from Linda, who was both supportive and challenging to me in my role as Chief Executive. Now that she has stepped down from the BLG Mind Board, it is a fitting recognition for her to receive this award from Mayor of Bromley.”