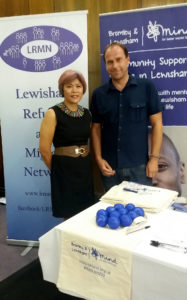 During Refugee Week (19th – 25th June 2017), the  Community Support Service in Lewisham took part in the Lewisham Refugee and Migrant Network event on Tuesday 20th June, as part of their continuing work addressing the mental health needs of migrants and refugees.

Vicky Foxcroft, Labour MP for Lewisham Deptford, spoke at the event and paid tribute to contribution of the migrant community to Lewisham and Lewisham’s history of welcoming migrants and refugees.

Thema Peart from Community Support Service in Lewisham has been delivering mental health and wellbeing workshops to migrants and refugees working with the Lewisham Migrant and Refugee Network and Afghanistan and Central Asian Association as part of the national Mind Supporting Vulnerable Migrants Project.

The workshops aim to increase knowledge of mental health services within local migrant communities and cover topics such as defining wellbeing, recognising signs of depression, stress and anxiety and how to access local support services. They have been very well received and it is hoped that this will lead to greater collaborative working in the future.